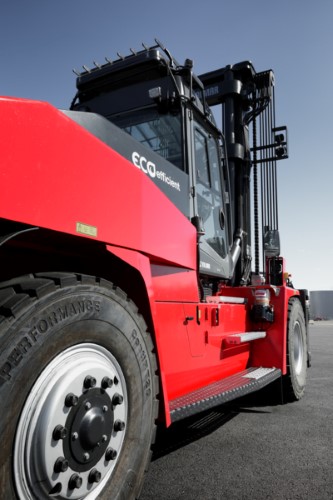 Almost exactly one year ago, Kalmar announced that its full offering would be available as electrically powered versions by 2021. Kalmar is now offering medium-sized electric forklifts powered by lithium-ion batteries as well.

“Our vision is that by 2021, we can offer electric alternatives across the board,” says Stefan Hultqvist, Vice President, Forklift trucks at Kalmar.

While the year 2021 may seem like a date off in the future, it is, in fact, under two years away, which means that Kalmar is closing in on its target.

“Our forklifts are almost there,” says Hultqvist.

Kalmar has also announced that its eco-efficiency range revolves around three themes – energy efficiency, systems efficiency, and resource efficiency -- so the fact that forklifts have now also made the switch to the lithium-ion battery is not a surprise.

“We’ve had the lead acid batteries for decades,” says Hultqvist, “but we consider the Li-ion batteries more sustainable for now and for the future.”

“According to our vision, our vehicles won’t use fossil fuels, so there won’t be emissions connected to fuel consumption,” he adds.

Li-ion powered forklifts check all the boxes when it comes to eco-efficiency, and thanks to ongoing development, they are only getting better. For example, while Kalmar has offered Li-ion battery powered forklifts since 2016, the first ones had a capacity of nine tons. Today, they have an 18-ton capacity.

“We had to do some further development work and adapt the battery management system for more powerful batteries. Now, they hold their full capacity for 4000 cycles.”

Of course, the customer’s needs determine whether or not they opt for the lead acid of the lithium-ion battery.

“The lithium battery can be charged in bursts over the course of the working day - on coffee and lunch and other breaks in activity - and the charging station doesn’t require specific facilities, which makes a big difference in efficiency and convenience, but it also requires that the customer’s process includes breaks,” Hultqvist says.

The future is lithium-ion powered

There are businesses where it may be difficult to include breaks, or that may have invested in different types of charging stations.

But at the same time, there are easily just as many advantages for switching to Li-ion powered forklifts, and not all of them have to do with eco-efficiency or the environment.

“Some companies, of course, feel the environmental pressure. They may have their own environmental policy that pushes them forward; there may be, for example, CO2 emission legislation that they have to comply with, and some simply want to be at the forefront of modern innovation.

“But for some companies, a good work environment is just as important. With the smaller and well-designed batteries, you get a superior visibility. The electric forklifts are quiet, so noise levels come down. They also create fewer vibrations and have a quicker acceleration, which gives the operator a much more pleasant and efficient experience,” Hultqvist says.

"The electric forklifts are very competitive.”

Also, an option for some customers may be to replace their diesel-powered forklifts with electric ones in parts of the process, but not the entire operation.

However, Hultqvist acknowledges Hultqvist that it is a readjustment for the customer. And there’s also the higher initial investment to consider.

“It is an investment. The electric solutions come at a higher price due to the fact that, as batteries and chargers are included, in a way you pay for your fuel upfront. But on the other hand, you get a faster, more efficient, and more silent forklift truck,” he emphasizes.

“And once you factor in the fuel savings and the battery’s life-cycle costs with its lower maintenance costs, the electric forklifts are very competitive.”

“The key for our customers is their drive cycle. They often say that their trucks are always on the go, but when we analyse their operations a little deeper, we’ve found opportunities to charge the batteries. We can help our customers with our expertise,” Hultqvist says.

If you ask Hultqvist, the future is obviously lithium-ion powered.

“The time is right. The market is ready, we’re ready, and the pieces are falling into place,” he concludes.

Themes in this article

The Port of Tauranga, New Zealand’s largest container terminal and premier freight gateway, has been a loyal Kalmar customer for over 20 years. The port’s equipment fleet features over 40 Kalmar straddle carriers and recently welcomed a new set of Kalmar hybrid straddle carriers. These machines and other eco-efficient innovations from Kalmar have an important role to play in helping the port to meet its tough carbon-reduction targets and fulfil its ambitious growth plans.

More than 30 years after the first Kalmar RTG entered service, the latest generation of this immensely popular platform is ready to set a new benchmark, with hundreds of improvements using the latest technologies. In this article, we take an in-depth look at the new features and functionalities and the benefits they bring.

Kalmar's Timo Alho, Jason Gasparik, Christopher Saavedra and host Pilvi Tähtinen-Sfakiotakis discuss the practical steps towards eco-efficient operations for container terminals, in addition to providing tips on how terminal operators can lower their emissions along with fuel and energy consumption. This three-part discussion originally aired as a stream on LinkedIn Live on 15 April 2021. 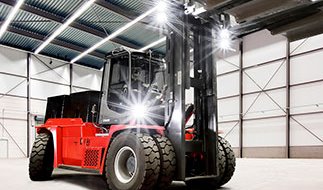